This is the only video footage of Al Grover's 1985 record crossing of the North Atlantic by outboard. Dr. David Ross shot the video in 1985. Ross was also making a Trans-Atlantic crossing in his 60' boat, "Mystic," when he spotted the 26' Groverbuilt, which he assumed was in distress.

Across the Atlantic by Outboard

By Al Grover, as told to Polly Whittell, Motorboating and Yachting

My love affair with boats began at the age of twelve. I used to work weekend fishing on the old wooden Verity skiffs that were used for decades on the south shore of Long Island. We'd come into an inlet at night when it was all whitewater--there weren't even jetties then-- and these boats would go right through the breakers just like ducks.

I liked the way Verities looked and the way they felt. So about ten years ago (after they stopped making them) I bought a 1926 model for a few hundred bucks that had been sunk for two years. When we took it across a bridge on our trailer, all covered with barnacles, the toll-taker wanted to know if we'd finally found Noah's Ark. But that hull became the mold for the Groverbuilt boats I've been making in fiberglass, with some modification, ever since. To be continued

Until recently I had done just about everything with my boats short of running them over Niagara Falls – and crossing an ocean – and felt they were pretty salty. (The Coast Guard even uses them in rescue work.) I've done plenty of coastal cruising where you always have a safe harbor to run to if the weather turns bad. But after reading a lot of books about long-distance voyaging by the likes of Joshua Slocum and Sir Francis Chichester, I began to wonder what it would be like out there, if I had the stuff to hack it... I had to find out. I needed to do something different and exciting to break the monotony of going to the shop every day for 35 years. I decided to try for a record crossing in a small motorboat. 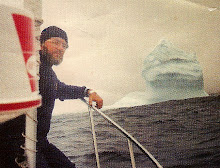